I've made some Groundhog Day Resolutions, but after reading The Ultimate Guide to New Year's Resolutions I thought about refining my goals to make them more specific.  Some of my goals are too vague and some need to be rolled together.  Goals need to be Specific, Measurable, Attainable, Realistic, and Timely.  Here are my Knit Year's Resolutions!

By December 31, 2010 I want to:
Here are the actions addressing these goals.
I'm more concerned about reducing the yarn stash since it's more out of hand than the fabric, but I really would like to work on both.  Stay tuned!

The Weaving Works, Seattle
Aubri, Mimi, and I met at Weaving Works; the plan was to meet at 4:30, but I showed up at 5:05, huffed as usual and I ran in to get my passport. The pattern is a for a cashmere lace hood. No way am I spending $37.50 on one skein, so I collect my stamp and free pattern and we go. Mimi made us an awesome google map of all the stops.

I call that a success!

knitmi has a great post with maps of our travels and commentary on the food. 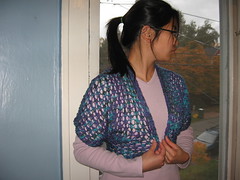 lace rectangle sewn into a shrug
Originally uploaded by smallsmallfaery
I'm trying to figure out what to do with my lace rectangle I started in Boston. Now that it's gone colder, it seems awfully impractical as anything but a scarf. 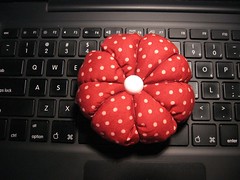 pincushion
Originally uploaded by smallsmallfaery
After Nicole and I "debugged" my sewing machine tonight, I came home and made this! 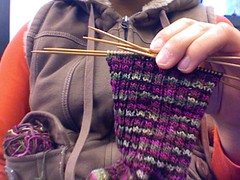 sock yarn pocket
Originally uploaded by smallsmallfaery
My mom got me an awesome vest. It even has a small pocket in the front that holds sock yarn well!

This is some pretty fabulous research going on at Cornell by Jonathan Kaldor, Doug L. James, and Steve Marschner.

Skim through the paper and you'll see all your favorite stitches. Watch the movie. It's a simulation and it's amazing. 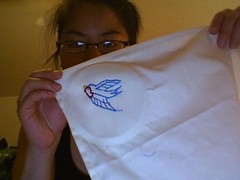 bird embroidery
Originally uploaded by smallsmallfaery
I got a free kit at the Craft: party in Boston, so I got some napkins to try it out.

I got into Somerville on Monday morning at 3:30 AM and then moved into my apartment in Allston in the evening. Boxes I shipped here arrived on Tuesday included bags of yarn and my ball winder. I miss my swift and spent a long time winding, tangling, and untangling my Schaefer Heather: 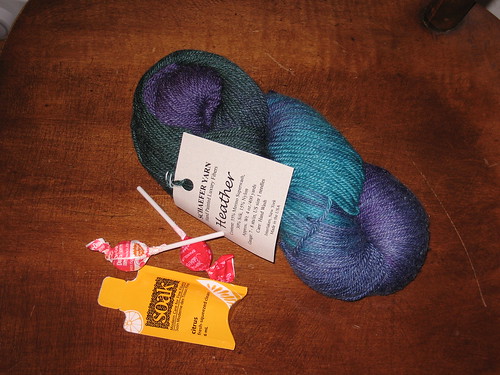 I used a back of a chair, tried to go slowly, but really, it was a pain in the butt. I don't really want to have my swift sent - what if it breaks? The first swift I ordered from Joann's arrived broken!

Later, I cast on for a single-skein shrug pattern from the LYS tour. 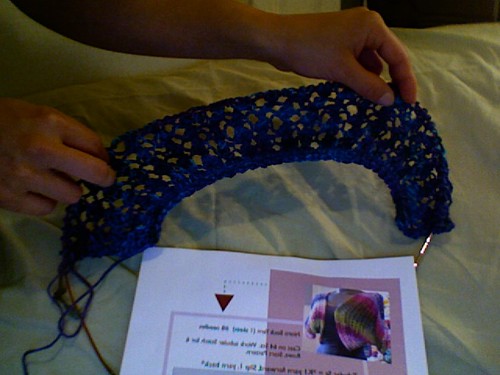 The pattern was free, and in fact, the yarn was something I won in an online contest at Eat.Sleep.Knit. so the whole thing is a free project!

I stopped into a yarn store A Good Yarn in Brookline as they were closing and made a new friend on Ravelry. I'll be heading to the Brighton Knit Brunch on Saturday. 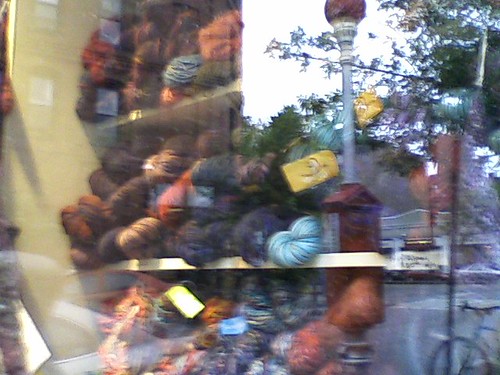 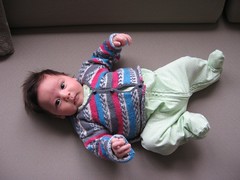 Adi in her new sweater
Originally uploaded by smallsmallfaery
It fits! 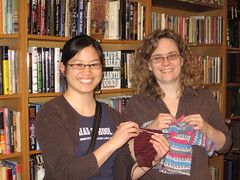 Meeting the Yarn Harlot
Originally uploaded by smallsmallfaery
OMG The Yarn Harlot is holding my first baby sweater! It's a christening of sorts!

I'm on her blog too!
Collapse